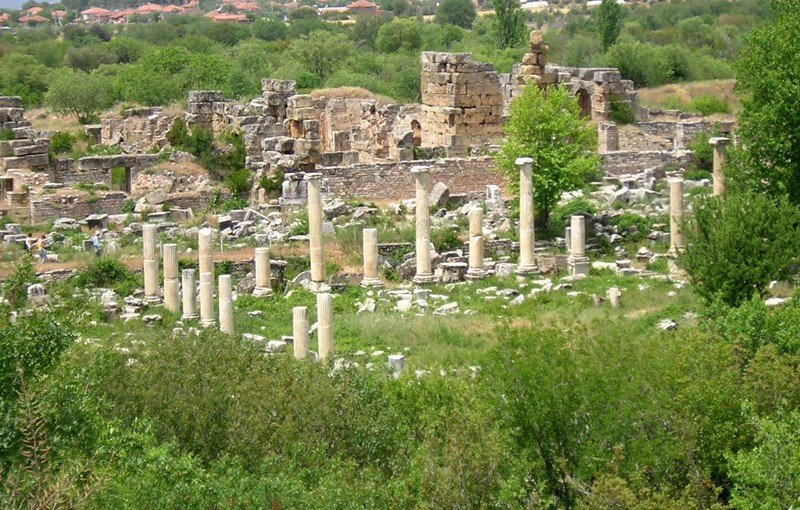 When you look to the northward across the theater, you can immediately see all the significant buildings. The wide area, which includes a large pool located in the middle and under the theater, is known as Tiberius Portico. The name of Tiberius Portico was given according to inscription, located on the north architrave, surrounded by the columns and porticos of the areas and dedicated to the emperor Tiberius. In the middle of the portico, there is a pool that is 260 meters long, 25 meters wide and 1.20 meters deep. The pool had been made with the aim to take control of water as a result o the floods in this area after an earthquake in the 2nd century of the AD. At the same time, the pool, used as a backup water tank for Hadrian’s Baths, was given to the city’s sewage system by many water channels.

There are various opinions on the function of the portico. According to an opinion, here is a Gymnasium, given sports and trainings. The blocks that cover the channel, surrounding the pool, are made as rows of seats in the theater. The running and training, held around the pool in good weather, was taking place under the portico in the bad weather.

According to another view, this area was a trip and jollity space, visited with the cool waters of the pool. Usually, people, come from the temple and the Odeon, was reaching to the theater by using this field. Friezes, located on the architrave of the Tiberius Portico, are very rich. These friezes, consisting of various heads, contain surprising issue richness.

The monumental structure, located east of the portico is referred to as the Agora Gate. However, the building was never used as a door. Probably, when the portico was flood, the structure was used as a fountain by changing the function. Putting blocks their way to show compliance with its uses closed the stairs, going down to the portico. Moreover, a pool had been added in front of the building and into the portico. The Agora Gate attracted attention its frizzes as well as its architecture.