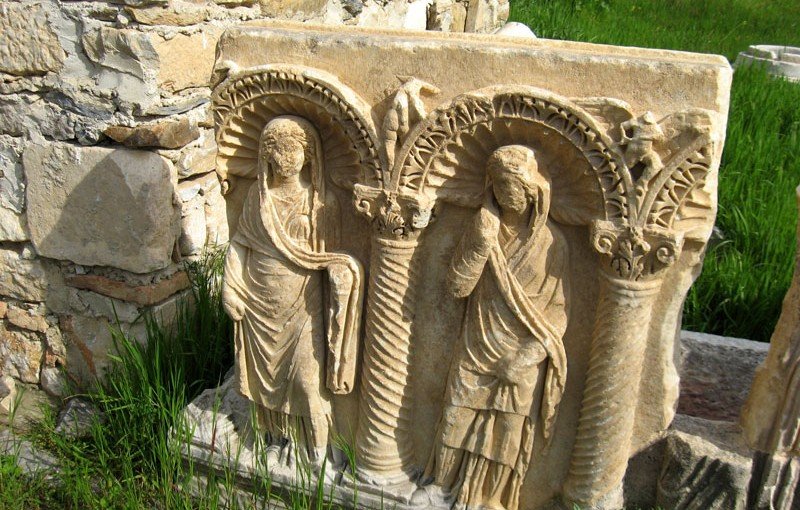 As being different from conference hall, concert place and theater, Odeon is a structure, maintaining the state by a good way. The structure, built in the AD 2nd century, is located the south of the temple. This structure, located south of the temple, was discovered by chance in 1962. This building, a half circle, was created in the 2nd century and the top row was destroyed during the earthquake of the 4th century. Due to broken fault lines, into the orchestra has been filled with water in winters. As floor coverings, opus-sectile and blue and white marbles were moved to the storeroom to prevent from damage. The part of the orchestra and the theater was decorated with mosaics and sculptures are under the protection of the museum. Also the conference room has a roof of wooden structure. There are full-size statues of famous people of Aphrodisias on a high pedestal on the stage building. This structure, boasting 1000 capacitor, has been used as the concert hall, for music shows, parliament building. There is a famous or rich person’s tomb, stepped on a platform in the northwest of Odeon.

It can be said that this area was the sculpture workshop by looking the statue pieces, discovered in area where there was, finished and left at the half. There is a complex consisting of a number of private rooms and shapes, with three apses and had an empty courtyard. This structure was probably used as the governor building at the late Roman. Then, it was used as the bishop’s palace after the adoption of Christianity.

The Odeon, located between the Agora and the Aphrodithe Temple, was made in 2nd century, AC. An earthquake destroyed the upper part of the seats of the current in the 4th century, AC. The Odeon, that had thousand-seat capacity with the seats, was covered with wood and tiled roof. Also, the porticoes corridor, opened to the northern agora behind the stage, was adorned with statues. Besides concerts, dance, pantomime, oratory, poetry readings and musical demonstrations, Odeon were used as a meeting hall for the city council.