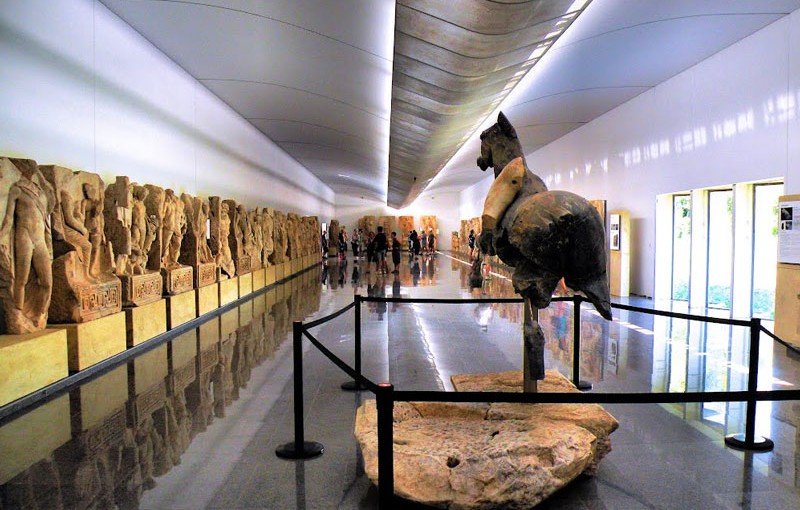 It clearly seen that works, found in the excavations of the Aphrodisias, have been exhibited in the Aphrodisias Museum, opened in 1979. The majority of the works constitute from sculpture. It is well known that there was a sculpture school that worked very qualified between 1st century of BC and 5th century of AC. The marble was brought from the cities’ one kilometers north of the marble quarries.

The Aphrodisias Museum is one of the outstanding museums, known as the western most unusual in Anatolia. Monuments have been displayed here as the term unearthed during the excavations. It would be enough to understand the grandeur of this ancient monument after examining the findings of the first cases to be brought into account. Especially, the work of the Aphrodisias ancient sculptor school level shows the development of this art. The museum can be visited after turning right from the entrance. Tendon busts, located opposite the wall of sales rayon, have some famous ancient philosophers and statesmen.

In the next hall, there is an original sarcophagus, depicting the imperial sculpture, portrait sculptures and busts and seasons figurines. Reliefs, displayed in the hall, are dependent to Zoilos’s tomb, the second founder of the city and are dated to the second so-called classic era of Auhustus period. In the Melpomene room, dressed dignitaries, tragedy spirit Melpomene and statues of Apollo. It has been named Odeon hall, which has been exposed statues of the sitting artist and boxers. Before passing the other section, unfinished sculptures are exhibited in the corner. It is a collection of techniques and stages worldwide to give an idea of sculpture. Showcases, which have been exhibited from prehistoric material, found from Aphrodisias, are located in the previous history of coins and wall displays.

There are Satire Statues carrying the sculpture of the young Dionysus, Herakes and Diskoforos in the hall, given the name of Peenthesileia and Achilles, made to inspire by the tragic story of the Trojan War. Then, in the middle of the hall, there is cult statue of Aphrodite, the mother goddess of the town. Just behind the sculpture, there is statue of Diogenes, who was the head priest of the temple, and his wife’s statue, Claudia Antony Tatiana, on the right. Two statues are monk statues of the Emperor Constantine era on the left side. The giant statue on the left is Demos, representing citizens. Before leaving the museum, immediately on the left, do not forget to say hello to the bronze bust of the archaeologist Prof. Dr. Kenan T. Erim, who provided to emergence of the ancient city of Aphrodisias city.