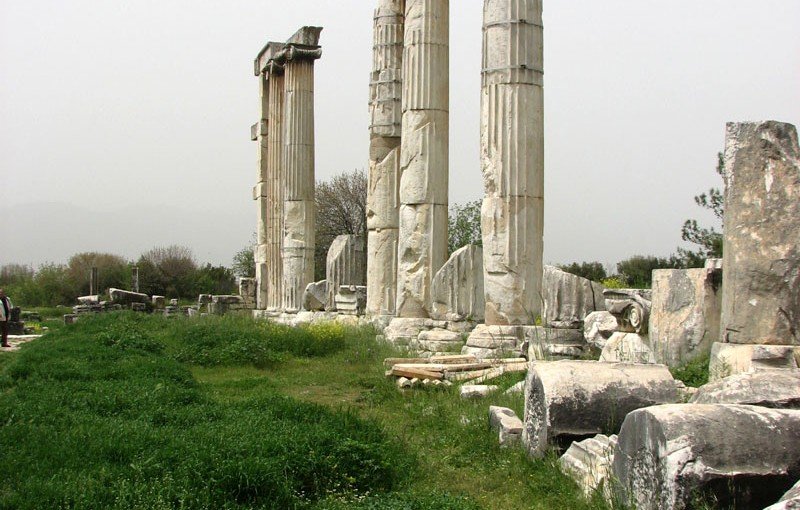 It is clearly said that the temple of Aphrodite is the most important structure of the ancient city of Aphrodisias. The preliminary construction of the temple took place in the archaic era. After the destruction of down-dwellers by the Medes and Babylonians, Assyrians from the city of Nineveh, brought along with the Assyrian’s goddess of love and beauty Ishtar’s cult to the out of side region. The describes of Ninos, the king of Assyria, and his wife Semiramis, emerged during the excavations of a relief situated, confirm this thesis. That is the basis of the cult of Aphrodite in the Mesopotamian culture. The structure, which is next to the sculpture school, climbing the imposing blue sky, standing still with its fourteen pillars, and the heart of the city, is the temple of Aphrodite. The temple, built on specific ionic style Anatolia, in the short side structure, surrounding the round of eight, ten three-column series in the long side, reaching a span twice the usual distance to the inner wall. Therefore, it creates the impression surrounded by two-column array (Puseudo Dipterous style). The temple, started its construction by Zoilos in the BC 1st century, had been fully completed in AD in 130 years. During the reign of the Emperor Hadrian, the structure was finalized by adding that surrounded the sacred walls of the buildings.

In that time, this sanctuary was entered through a monumental entrance building in the eastern direction. The cult statue of the Goddess Aphrodite was called Cella room, located within the temple and could have been entered by only clergies. The Aphrodite temple was one of the places of pilgrimage of the pagans (polytheistic believers in religion) and it was carrying a refuge to protect as new. According to a rumor, only male priests were working in the temple. The ancient temple of Aphrodite, settled in the North region, formed the city center and core. All that remains of the old temple contains 14 columns of 40 columns and these columns encompass its once around. On the other hand the worship of the temple remained from the first time, today it is seen that it had started in BC first century and is believed to be completed in line with the start of Augustus. Some of the columns had been given names of persons, who made it. Some of the mosaic structures of the temple in Hellenistic times indicate that here is an ancient temple. Also, the statues, contained by Cella’s walls, were removed and the columns were expanded with the outer movements. The walls were increased and made abscess on the eastern and western sides. There was no cult statue in the Cella, but it was found by moved out with all the features. Today, the museum display is shown in a new way and is similar to the Ephesus Artemis solidified.

One arm of the Goddess wears a long dress to be forward. It has a very interesting carving relief on the strip of the dress. Sun and moon goddess, three graces, and Aphrodite stands in the middle. Aphrodite and three “Cupids” are sitting on a goat with a fish tail. Everything emerges as a symbol made on various copies of them to worship idols. The temple was converted into a city with a large church to be Christianized at the end of century of 5, AD. The columns on the short side of the temple, adding to the long side and the elimination of part of a plan to sell three naves were created. To the church, surrounded by walls, were made of the west entrance called narthex and circular apse in the east (altar). There are stairs in the apse located where the choir. Also, there are some murals in the curve of the half circular apse vault. The depictions of Jesus and the Virgin Mary, between the angel Gabriel and Mikhail, are located in the center. They are at least sixteen more pictures outside. The interior of the church and graveyard of the church was used until the 11th century. Meanwhile, during excavations, some layers, which were very important for archaeologists, have been damaged. The church was used until the 11th century. When George Tornikes, the Bishop of Saint John church in Ephesus, was visiting the Aphrodisiac in 1156, he explained:

“In the church, abandoned after the earthquake affecting the region, now only owls hoot.”