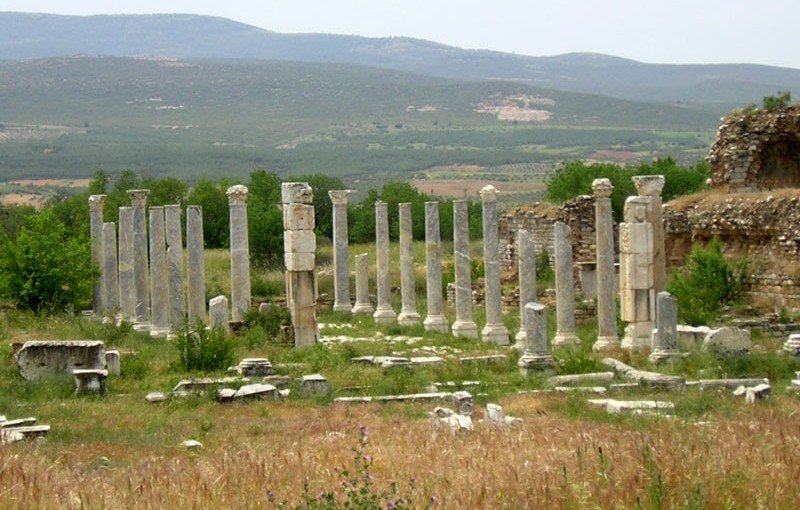 Earthquakes in 4th century caused flooding pressed the city’s agora. Due to fact that some problems occurred in the use of the northern city, the city decided to build a new agora and they made a new bazaar in front of the theater around the column-lined square. Because of an inscription found here, this area was named Terastoon, which means that it was surrounded on four sides by columned gallery that flows. There is a circular planned fountain in the middle of the paved square, showing the structure stone square. There is a circular sundial on the paved square. The inscriptions on the pavement are related to names indication the location of endorses from the bazaar.

Due to the fact that Tetrastoon is not large enough to accommodate the commercial potential of the city, a hall, basilica planned, was made immediately to the south of the Tetrastoon between the east-west streets. In the middle, the marble and vaults covered section combined Tetrastoon with the street. There were boutiques by two sides of that transition. That section was called the Emperor Hall on the basis of emperor statues. There are people and animals reliefs on the pillars at the entrance as typical production of Aphrodisias sculptures. Restoring placed the portion of the gray-blue columns and pillars in this area.

The Theater Hall is located at the south of theater and just east of the Imperial Hall. The excavation of the bath has not yet finished. Bath’s Apodyterium (dressing room), domed caldarium (hot section) and sudatorim (sweat lodge) sections has been opened and other parts have been wafting the excavation.