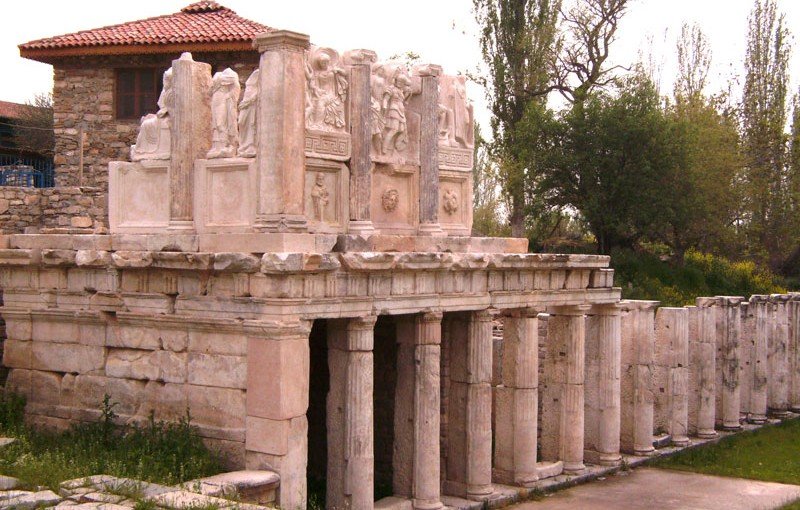 Prof. Kenan Erim found a huge temple complex, which was dedicated to family of Julia Claudius, who was the first emperor of the Roman Empire and goddess Aphrodite, in 1979. As it is known that the building was named as Sebasteion as it is understood from inscriptions on the structure. The name means ‘great’ and is correspond to the Latin word Avgustus, a Greek word. There is no another Sebasteion in East of Roma as particularly large and rich from the point of reliefs. The structure is located on the street, starting from the northern gate and ending on the theater. The cult center was started to build during the reign of Emperor Tiberius (AC. 14-37) and it had been completed during the reign of Nero (BC 54-68). The main structures of the cultural center, demolished and rebuilt several times because of the earthquakes, had been completed on time of Emperor Claudius. At the present time, column backwards and Corinthian style column headings remain from the temple foundations. In addition to damage caused by the earthquake in the 4. 7. Century, the migrations of Turkish and Byzantine periods caused great harm to the temple.

The city, which extends east-west direction and was planned as grid, is not aligned with any other make. It is consisted of a ceremonial way and two long porticos, covering 80 m long and 14 m wide. The portico ends in the west are coupled to a last tetra pylon in front with street address. The entrance building (proplylon), opened to street, has two floors. The road, 14 meter wide and marble-paved, ends with the victory of the temple, situated on a podium. There are triplex porticos on both sides of the road. Moreover, in these buildings, there are stands, that fall into the original embossed on them between the columns in the second and third floors.

The second floorboards include mythological scenes and the third floor plans include scenes related to the emperor. It is clearly understood from the architrave on the first floor that the structure probably was built by two aristocratic families. These are two brothers, named Menander and Eusebes, who build entrance and the north portico, and Eusebes’s wife, Apphias. Also, other two brothers, named Diogenes and Attalus, were given Nike (victory) and the south portico of the temple. By building this monument, these brothers saw it as an opportunity to get into the hands of again noble after Zoilos death, which had impact on the city on the Roman Empire, and they referred to give the massage that by themselves in the city.

The column headings inside and outside include panels unprecedented amount of relief and decor. The most significant of these is the birth of Eros, Sebasteion Three Graces (three deadlines) of Apollo in Delphi, Meleager, Archiles, Penhesile, Nyssa and child Dionysus. In addition, it is deeply seen that there is the remains of the mythological figures and members of the imperial family. They are Augustus Germanicus, Lucius and Gaius Caesar, Claudius and Agrippa, who escaped with Aeneas from Troy Prometheus. As different from the rest, there are interesting relief symbolize the group of Claudius’ conquest of Britain and Nero’s conquest of Armenia. Furthermore, there are many other fragmans, suffered damage as a result of the earthquake, which depicts the effect and maintained Augustus battles and relations with other countries. Partially between the uncovered in constructions, there is a monastery with the cemetery in the southwest of the Acropolis. Also, there is a small basilica, converted into a church later in the southeast of the theater baths.

What was the reason that Aphrodisias, pushing to make this unique and magnificent work? It needs to go to far Trojan War to find the answer. The name of the story is the Aeneas’ myth. Azra Erhat explains this epic in his work, named ‘mythology Dictionary’: “Aeneas is the son of the goddess Aphrodite and the Trojan prince. Troy’s King Priam and Ankhises are cousins, and they are the same generation with Hektor. Being the son of a goddess had gained him an advantage. However, all Trojans were killed and the war was lost. Aeneas, taken his father on the shoulders, hold the hand of his child and along with his wife, escaped to the mountain, Ida (Kaz), with the help of the Goddess Aphrodite. After the legend of Odysseus and a thousand adventures reminiscent, Aeneas, who lost his wife and his father, come with his son to the Palatine Hill, where Rome city was founded in the future. In there, he beat and killed the king Tumust of Rutuls in the single combat.” Seventy uncovered in excavations on the board are protected in the depot of the excavation house in the garden. These reliefs, which will be exhibited in a new museum near future, contain a rich subject.

Besides mythological subjects such as Three Graces, Apollo, Achilles, Penstasili, Aeneas fleeing from Troy, Dionizos and Heracles, reliefs of the emperors and relatives such as Avgustos, Lucius, Gaius Caesor, Claudius and Nero also located in here.

After the end of Paganism, with remaining portions over from the earthquake, Sebasteion had used as a shopping center. After the decline of the city, it collapsed and covered with silt brought by the floodwaters, on them were made of old Geyre village houses. Moreover, a report and the findings, mentioned about the large Jewish community in Aphrodisias, the Synagogue and their sympathizers, are founded. Those sympathetic were called as “Theosebeis”, defined as religious, and they were defined as sympathetic towards Judaism but part of their religion.

In addition to all of that magnificent structure, house structure, located within the town, academies, and schools of sculpture has also been uncovered. Most of these structure, figurative or geometric mosaic-style processed coatings, crafts and pottery have been found. After 7th century’s earthquakes, many of these houses were abandoned or they were used with a bad repair.