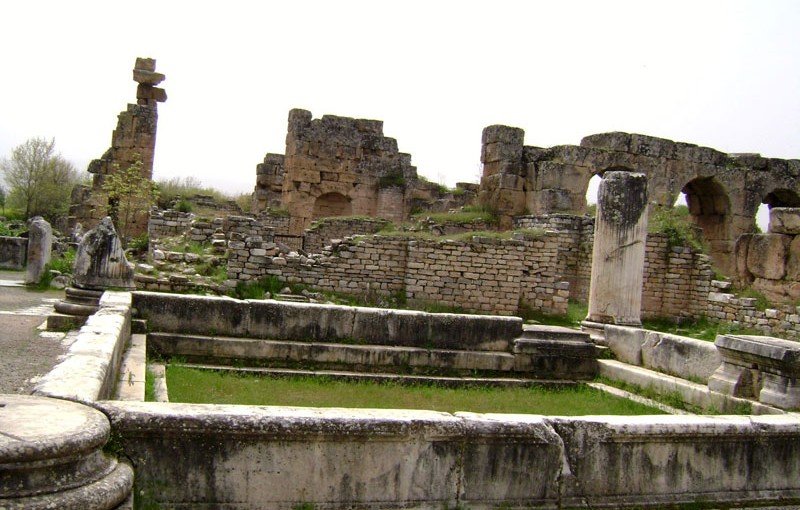 Hadrian, the Roman Emperor, came to Aphrodisias in one of his travels in Anatolia. The city council had erected these baths the memory of this visit. Baths consists of two large sections of men and women, who washed separately. There is a pool, involving large marble columns at the corners, In front of the entrance on the northern side. Moreover, there are dressing room (apodetarium), cold (frigidarium), warm room (tepidarium) and temperature (kaldari) forms in the right side, parallel to each other. Under the structure, complex galleries and corridors, which make up the heating system, have been called as hypocaust. Throughout the structure, sandstone was used and it was covered with marble slabs.  Piers, the front yard of the building (palaestra), are a very ornate section with its beams and fringes. Over elements of marble were depicted with Eros, human and animal figures, which are located in acanthus leaves and is characteristic of Aphrodisias School. The mythological giant heads, forming the console head of the entablature, have been displayed on the fences of the museum’s entrance.

Bathrooms were built in the west of Tiberius Column Road in the 2nd century, during Emperor Hadrian’s reign. The complex structure includes a large central concert hall, surrounded by four large rooms. These rooms are tepidarium, sudatorium, Apodyterium and frigterium. Here is where the opportunities have imposed mandatory building such as service corridors of the labyrinth below, water channels and furnaces.

The Frenchman Paul Gaudin, a railway engineer, made the first excavations at Hadrian Baths in 1904. A part of artifacts, removed from excavations, moved to the Istanbul Archaeological Museum and some of them were carried to the abroad as unauthorized. Professor Kenan Erim proved that the heirs of Gauden sold the body of the fisherman head of Tiberius Portico, found in 1989, to the Pergamon Museum in Berlin. There had been an attempt to give back to the picture of Aphrodisias.