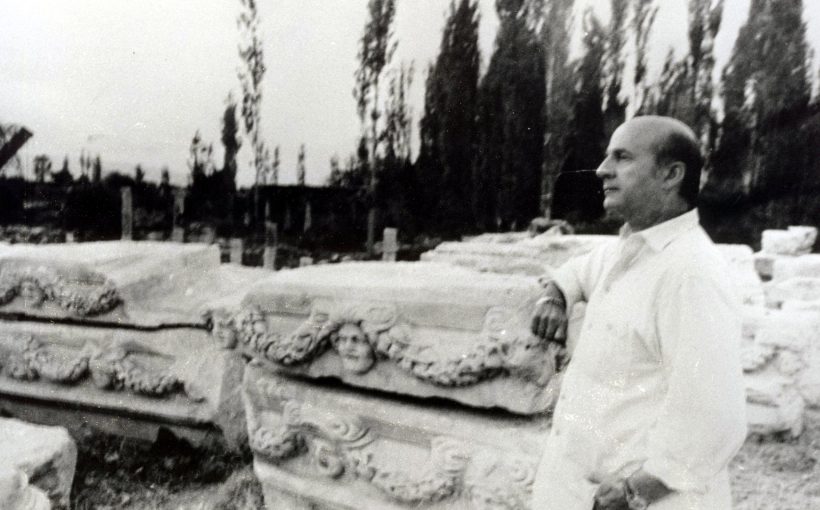 Dr. Kenan T. Erim, a noted archeologist and professor of classics at New York University, who for 30 years led excavations of the ancient Roman city of Aphrodisias in southwestern Turkey, died on Friday while visiting the British Embassy in Ankara. He was 61 years old and lived in Princeton, N.J.

He died of a heart attack, a family spokesman said.

Since 1961, Dr. Erim (pronounced eh-REEM), a native of Turkey, supervised the digging in the all-marble city, which contains a bounty of late Greco-Roman art 100 miles from the Aegean. Aphrodisia had a wealth of marble that was used to build even workers’ huts and a two-mile-long city wall, which still stands.

Among the discoveries, Professor Erim wrote in 1972, have been “300 fragments of inscribed stone panels” in the marketplace. The panels list fixed prices, a devalued currency to deter “runaway inflation” and penalties that include death for speculators, who were denounced by Rome as “insatiably greedy men.” Hundred of Statues Found

Highlights of the treasure-trove are a cultural complex with a virtually intact stadium for 40,000 people, a theater seating 10,000, a concert hall, luxurious baths, more than 200 exquisite statues and a great temple that lured pilgrims for the worship of Aphrodite.

Dr. Erim summarized the creative and versatile work by the city’s sculptors and other artists, particularly in the first two centuries A.D., in “Aphrodisias: City of Venus Aphrodite,” published with many color photographs in 1987 by Facts on File.

R. J. A. Wilson, a lecturer at the University of Dublin, wrote in The New York Times Book Review that Dr. Erim had written not only with passion and devotion, but also “with ease and polish, and with all the thrill of a detective story.”

Kenan Tevfik Erim was born in Istanbul on Feb. 13, 1929, and received his early education in Geneva, where his father was a Turkish representative to agencies of the League of Nations. Arrived in U.S. in 1947

The son came to the United States in 1947, earned a Bachelor of Arts degree and was elected to Phi Beta Kappa at New York University. He earned Master of Arts and Ph.D. degrees at Princeton.

He had been a faculty member at N.Y.U. since 1958 and a professor of classics there since 1971. He was fluent in many languages besides Turkish and English, including French, Italian and German, as well as Latin and Greek, which were among the courses he taught.

His awards included honors from the National Geographic Society, New York City and several countries. In later years Dr. Erim concentrated increasingly on the digging at Aphrodisias and on raising funds for the project, which he termed his “love affair with Aphrodite.”

He is survived by a sister, Canan Camogly of London.