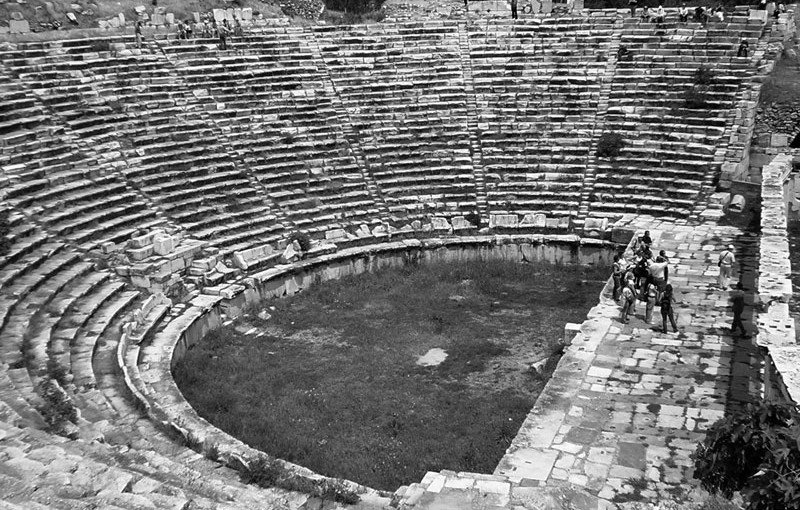 The most important issue for Prof. Dr. Erim, who decided to stay the theater at the beginning of 1960, was homes of the Geyre village located on the theater. First, residents of the old houses moved to new houses in the village of New Geyre. The excavation was begun in 1966. The lower part of the two-part bench (lower cavea) and the ground floor of the stage building were seized intact. The result of the excavation, many statues, reliefs and valuable works of art, relating to the age of the prehistory and history, and taken under protection by the theater, were found. Also, many statues were found in the building stage.

The mound, located at the south of city and at 24 meters high, was used as a lookout after the 7th century. In the ditches, excavated along the western slope of the hill, pithoi, and brick walls many home appliances and idols were recovered. Delfts and two idols, found in studies of the Molasses Hill, were dated to late Neolithic, late Chalcolithic and the early Bronze Age. The city’s theater was made in the second half of the first century of the BC by carving on the eastern slopes of the acropolis. Before excavation work, acropolis excavations lined with old Geyre houses, was started with support of the National Geographic Society. Looking at the current situation, it can be said that the theater was repaired and changed during the Byzantine period in 2nd century.

Zoilas, changed the fate of the ancient city of Aphrodisias, was made the theater. It can be understood from the inscription on the stage structure, which was built in the first century of the BC. According to the inscription, this complex was a gift of Julia Zoilos to the goddess Aphrodite and to the citizens. In addition, based on this article, it can be said that the theater was finished before 27 years from BC. Carving the eastern part of the mound, given Acropolis Hill name, made the theater. The upper part of the section, consisted of two rows of seats, was removed while the castle was building in the Byzantine era. The stage building is Anatolia’s oldest three-storey stage building. The Doric, Ionic and Corinthian styles were located. The statue of Apollo and Melpomene, exhibited in the museum, were found here. Moreover to this, boxers and the bust statue of Aphrodite was uncovered in the excavation.

The semicircular orchestra section in the middle of the Aphrodisias Theater, the emperor Marcus Avrelius time (161-180), was deepened by removing the bottom rung of the bench and was used as the arena by turning to the Konis.

It was also made several structural changes to adapt to the gladiator battles in the 2nd century of the A.D. Building sites were expanded and was combined with “cavea”, a room that was grown wild animals, and was added several corridors. The stage building was severely damaged in the earthquake in the 4. Century and was restored. With the 7th century’s earthquake, following the collapse of the upper part of the Caveau and packing of a section, the Byzantine citizens completed to the orchestra and site buildings and they made their home on top. They turned the hill to the castle by framing walls and towers. The most interesting end intriguing finding, discovered during excavations, is Zoilos relief. He, played an effective role to establish good relations between Aphrodisias and Rome and was exempt from tax in the city, is a slave of the Octavian. Some parts of the theater are given by Zoilos as a gift to the Aphrodite and the citizens of Aphrodisias. The first century, the year of the first made the theater, was stated in the article dedicated to building on the scene. In the proscenium inscription, Zoilos describes as ” a man freed by the Holy Julius’s son (Octavian)”. By making variations of the theater in the 2nd century of the AD, it was also provided to use for different demonstrations.

The Aphrodisias Theater changed by seeing some repairs in the 2nd century AD period. In addition, the stage building damaged largely with the earthquake 4th century of the AD and it completely destroyed by a powerful earthquake in 7th century of the AD. The upper ave, completely destroyed by earthquake, was corrected and houses were made in here. This hill was converted into a fortress with turning around the walls and towers and it was used as a theater dump.

There were vaulted and medium-sized 6 dressing rooms or warehouses in the stage building. At this stage building, a well preserved and 5 meters in height and 15 meters in length, there are Hellenes inscriptions. Two-boxer statue, the Demos statue, Melpomene and Nike statues, exhibited in the museum, was found in the front of the scene. The northern wall of the stage building was named as the archive. The inscription on this wall contains important correspondence related to the ancient city of the Aphrodisias. These are privileges, given to the city by emperors and special senate decisions. For instance, an article cites that a gold statue of Eros, a gift from Caesar, was stolen and taken to the temple of Artemis at Ephesus and then it was withdrawal. After the Christianization of the city, names of Aphrodite and Aphrodisias were engraved from these articles.