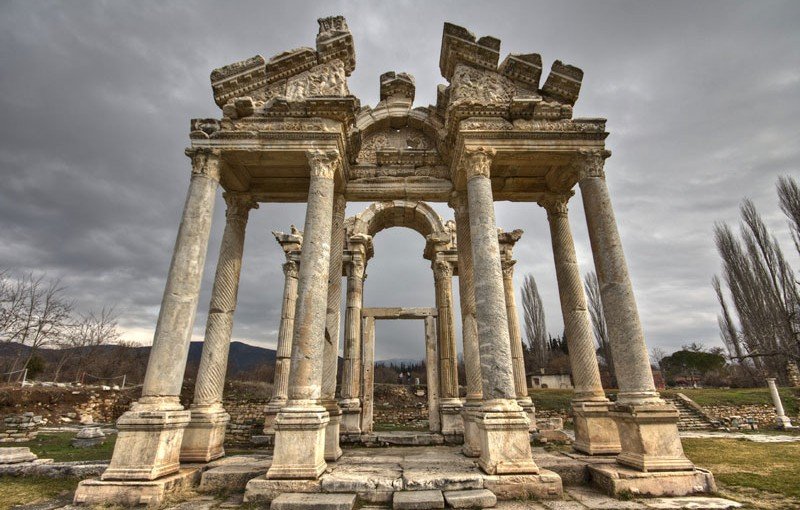 It can be said that this monumental door, located to the east of the temple and on the north-south street, is dated with AC second century. This structure, built in the Corinthian order, means the tetra: four, pylon: the door in Hellenes language. It has this name because it consists of four columns on four sides. It is difficult to say it has a function exactly. It is not in the axis of the entrance building of the temple. However, we can say that the ceremonial procession, reaching the temple, gathered here to go to the temple. In general meaning, these structures are monuments of the architect and sculptors from Aphrodisias, who aimed of showing their absolute. It is clearly seen that using very rich styles together made its architectural style. Flat, ribbed, some of spirally fluted columns consist of two columns. Some of columns were made of blue marble.

Hunting scenes, consisting Eros, existing in between the acanthus leaves in the broken out field style in the Western pediment, Nike and horses, were depicted. The east pediment consists of a semicircular arch. From this belt, Venus, Aphroditche’s star, has been glow from morning to the evening. From the 2nd and 3rd column is seen with Nike and Erotes relaxing way, printing structure and semicircular threshold. 16 columns were re-erected. Also, repairs were made and tried to stay as true to fact.

There is a modes grave, which was made of white marble from Aphrodisias marble quarry, in the east of Tetrapylon. Here, there is Prof. Dr. Kenan T. Erim’s grave. He devoted half his life to reveal the ancient city of Aphrodisias and he afforded large collaborative to introduce this city. Kenan Erim, who spends huge effort for the restoration of the Tetrapylon, was launched into eternity after three weeks the end of the structure of the repair and the opening time by the term President Turgut Ozal. Tetrapylon’s repair is the most important restoration ever made in Anatolia. 80% of the original parts, used in ancient times, were put into place by making excavations. Furthermore, it was made an instruction to obtain an idea of the whole structure. In the repair of the building, Austrian architects and Turkish archaeologists and craftsmen served. Tetrapylon’s repair and reconstruction of the columns was completed in 1990.