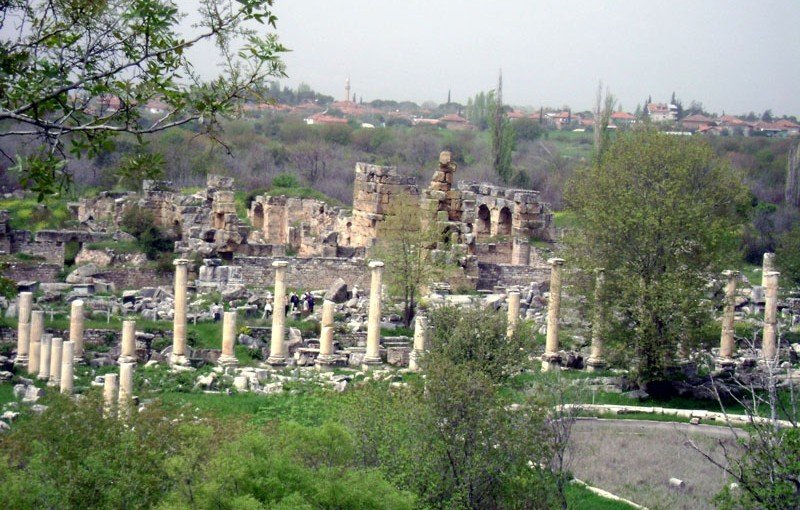 Agora was planned in first century of the BC and was begun it construction. It is located in the south Odeon. The around the original building was surrounded by round columns. Today, some columns, carrying ion-style titles of the western and eastern corners, have survived. These columns, staying side by side with poplar trees and climbing into the sky like competing with them, can be seen easily when viewed through the theater.

Also, the area of this Bazaar, built in the end of first century of the B.C, has been used as a popular meeting place. There is a colonnaded entrance 200 meters distance from the east-west direction and it is composed of two long porticos in the ion style. It has been assumed that the north portico’s building of two long portico had been started early from the south portico. The portico of the south has been known as Tiberius entry. During the old systematic excavations, the Italian team drew quite valuable ornaments shaped strip in the 1937. In addition, praise inscriptions of the emperor Tiberius were found. Last years’ excavations has been carried out in the west of the Baths of Hadrian and in northern and south-east of the door of Agora, and a large of talented sculptors and carvers chip has been discovered. Most reliefs include wreath masks, surrounded by individual or holy portraits, and mythological decor. The monumental gate of the Agora is located in the end of the portico of Tiberius.

Studies conducted in the portico of Tiberius in 1937, in some of the friezes, a dedicatory inscription written in honor of the emperor Tiberius had uncovered, and it was understood that this portico a part of the agora. Moreover, many frieze blocks, adored with faces of woman, men and hundreds of holy people on the columns, have emerged. According to results and analysis, the line of the northern column was finished in the first half of first century. However, the western end of this line was restored as a result of the earthquake in the end of 2nd century. The agora door, located at the eastern end of the agora was made immediately after the 2nd century. Both ends of the door, shaped with two floors, columns, and niches, had two vaulted tunnels.

That door was translated to a fountain in order to protect Agora from flooding (Nympheum) after the earthquake. There was a pool and also terracotta pipes were decorated to flow water into the pool. As far as it is understood from the inscription on the pool, that change was dated to the 5th century (after the 4th century earthquake).

Many statues and reliefs, that decorated the nishes of the Agora door, were used in the construction of the walls of the pool. Kentauramachi, Gigantomachie, Amazonamachi are some of these scenes. Agora is connected on the north to the Odeon with a small entrance building. In the middle of the Agora, there is a pool. On the east side, there is an entrance with its jambs and lintels.