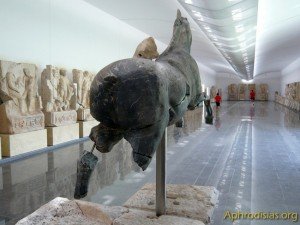 The Troilos, The Horse, and The Achilles – The galloping horse of dark blue-grey marble was found in 1970 in the Civil Basilica beside the remains of its pedestal. The monument was a daring composition that had already been restored once in antiquity.

The horse wore a gilded bronze saddle cloth in the form of a feline skin attached to its back with small iron pins. It was ridden by the figure of a naked heroic youth of which only one thigh survives. From its fixing behind, it can be seen he was falling off the horse.

The monument was mounted on an L-shapped base, facing down the interior nave of the Basilica. The lower part of the base remains in situ in the Basilica. ?ts upper plinth is restored here beneath the horse. The plinth has a cutting for a figure standing beside the horse. This was a three-figure group of horse, heroic rider, and standing figure.

The subject was Troilos and Achilles. The young Trojan prince Troilos was ambushed and killed by Achilles when he rode out to a fountain outside the walls of Troy. The group probably showed Achilles in a well-known composition, pulling the young Troilos from his galloping horsa by his hair.